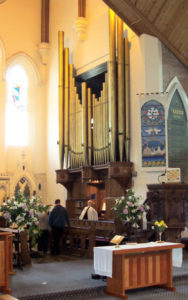 The organ in Christ Church was built by “Father” Henry Willis, the pre-eminent British organ-builder of the nineteenth century. It remains to this day substantially the same instrument which he installed in 1888 – a rare and important survival.

As anyone familiar with the work of Father Willis will expect, the Christ Church organ abounds in majestic chorus work, brilliant reeds, colourful flues and many beautiful solo stops and quiet effects.

This masterpiece of the organ builder’s art continues to do justice to music from all periods, including the most modern repertoire. It remains a substantial part of our local and national heritage and should provide service, pleasure and inspiration for generations to come.

As the renowned writer W L Sumner observed: “A Father Willis organ is part of our artistic heritage: it should be jealously preserved”.

The organ was built in 1888 by ‘Father’ Henry Willis, replacing his two-manual instrument of 1857 which had been located in the West Gallery. Although he re-used some pipework from that earlier instrument, it was all re-voiced to suit his entirely new 1888 tonal scheme and located at the east end of the church on the south side of the chancel.

Some time between 1888 and 1925 a Vox Humana stop was added by a builder other than Willis. A rather more serious indignity befell the instrument due to a lightning strike to the church in 1925: the resulting fire led to significant heat, smoke and water damage to the organ, though mercifully there was no direct fire damage thanks to the south transept wall. Following this near tragedy, the Willis firm carried out a complete overhaul in 1926, repairing or replacing damaged pipes and re-leathering the action.

The opportunity was also taken at this time to complete the original specification by adding the Great 16’ Trombone and third Open Diapason. Additionally, the Swell Piccolo was moved to the Choir division as the 4-foot Lieblich Flöte, the Vox Humana was re-voiced and furnished with a bottom octave, and a balanced Swell pedal was fitted. This is the composition of the present instrument.

Another mercy was extended to the organ by its escaping any serious injury during the blitz of 1940-41, despite significant bomb blast damage to the church. In 1948 the Willis firm undertook a complete clean and overhaul, a process which was routinely repeated in 1977 by the local firm of Rushworth & Dreaper. The instrument is now in the care of David Wells Organ Builders of Liverpool.

A possibly unique feature of the Christ Church organ is the pitch selection mechanism for the Pedal division. The four speaking stops sound only if drawn in conjunction with either or both of the pitch drawstops (16’ and 8’), each 16’ rank being extended up the extra octave. This early example of extension makes for a more versatile Pedal division than is found in many British church organs of the period. Intriguingly, an occasional deputy organist at Christ Church was the notable organ-builder, Robert Hope-Jones – whose later, radical development of extension organs in America from 1903-14 formed the basis of the Wurlitzer theatre organ. There is, of course, no further extension work in the Christ Church instrument. 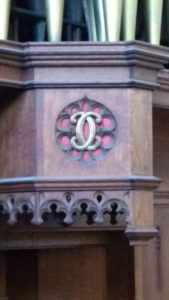 The double C decoration above the organist’s bench
is the inspiration for the Christ Church logo.