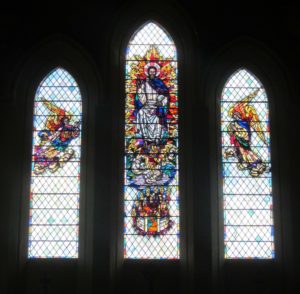 When a landmine landed in Bessborough Road during the Second World War, the East Window of the church was shattered and destroyed. After the war, in 1951, a lady artist, Mrs Everett, was commissioned to design a new East Window.

Since the church has ‘Christ Church’ for its dedication, the central feature of the window was bound to be a representation of the Exalted Christ. The details of the angelic figures on either side are drawn from the Book of Revelations. The seated triumphant Christ holds in his hands the Book of Destiny that controls and interprets the course of human history. His feet are depicted as resting upon the globe – Christ the Lord of Lords and King of Kings. Beneath is an impression of the new Jerusalem ‘coming down from God out of heaven’ surrounded and lit by the seven lamps of fire which are the seven spirits of God. The face of Christ has a marked Hebrew likeness, but it is a strong face. The plain glass in the window has been successfully tinted so that there is no glare in strong sunlight. (Taken from the Parish Magazine, May 1959). 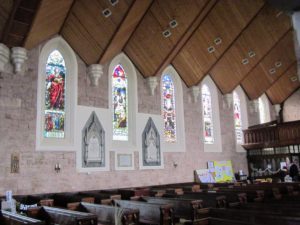 There are five windows on each side of the Nave. Those on the north side were shattered by bomb blasts during the Second World War and were replaced with clear glass to give more light. The stained glass windows on the south side of the Nave were given in memory of Canon Robson and prominent members of the congregation.

The window in memory of Canon Robson depicts a scene from Pilgrim’s Progress, showing the Evangelist in the house of the Interpreter. The second window is in memory of Robert and Kate Thompson of Roland House. There are two windows in memory of the Ropers – one remembering James Roper and the other in memory of his wife Agnes. The window nearest the gallery is in memory of John Scott and his wife Elizabeth. James and Agnes Roper are also remembered by two plaques on the north wall of the Nave. James Roper lived at Rydal Mount, a large house in Shrewsbury Road and was a well-known philanthropist. Among the many projects he supported was the building of the Children’s Hospital in Woodchurch Road.